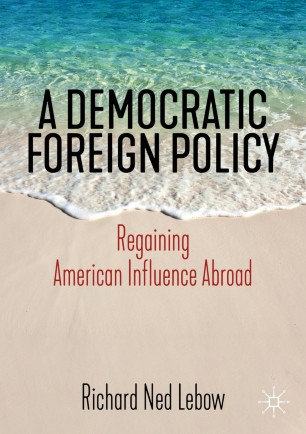 In 2020, America will elect a president, deciding not just the trajectory of its national politics but the future of American foreign policy. Will the Alt-Right, nationalist, and mercantilist approaches to international trade that characterized Donald Trump’s rise to power maintain its hold? Or will the “national security establishment” ultimately prevail, continuing the illusion of the indispensable nation? In A Democratic Foreign Policy, renowned IR scholar Ned Lebow draws upon decades of research and government experience to reject both options and set forth an alternative vision of American foreign policy, one based on a tragic understanding of life and politics. Lebow challenges the assumptions of establishment voices on both sides of the aisle, and offers a probing rethinking of America’s role in the world to disrupt the inertia of a bipartisan ideology that has dominated foreign policymaking since the days of Truman. Emphasizing the importance of America’s core values for shaping domestic and foreign policies, A Democratic Foreign Policy provides a vision and blueprint for a new congress and president to reorient America’s relationship with the world

Richard Ned Lebow is Professor of International Political Theory in the Department of War Studies, King's College London, UK and James O. Freedman Presidential Professor Emeritus at Dartmouth College, USA. He is also a Bye-Fellow of Pembroke College, University of Cambridge, UK. He has also taught strategy for the National and Naval War Colleges (US) and served as the first scholar-in-residence in the CIA during the Carter administration.

“In A Democratic Foreign Policy, Ned Lebow develops the tragic view framework to analyze how and why states behave. Drawing on the author’s half a century of distinguished scholarship, this book offers an original contribution to foreign policy literature. Lebow uses the idea of “credible commitment” to formulate a strategy for dealing with the central challenge posed by the rise of China. In so doing Lebow effectively refutes the claim that power transitions inevitably lead to conflict. A Democratic Foreign Policy will constitute a valuable part of the debate over the next two years about what has gone wrong in 21st century US foreign policy and what needs to be changed.” (Fred Chernoff, Harvey Picker Professor of International Relations, Colgate University, USA)“In this insightful book, Ned Lebow suggests a modification of the muscular, hegemonic approach to foreign policy followed by both Republicans and Democrats since the beginning of the Cold War. This macho approach has led to frequent military actions, which often have not been in the country's best interest. Given today’s realities, the cure that Lebow suggests is a more thoughtful, restrained, and affordable foreign policy more in line with national needs and values, and less dependent on overwhelming economic and military power. This is a discussion well worth having.” (J.M. Houlahan, Foreign Service Officer (ret.))

“Those seeking a sensible alternative to an American foreign policy suffused with triumphalism, unilateralism, and mercantilism need look no further. With his customary wit, incisiveness, command of history, and appreciation of the tragic element in politics, Ned Lebow provides a superb one.” (Rajan Menon, Anne and Bernard Spitzer Professor of International Relations, City University of New York, USA)