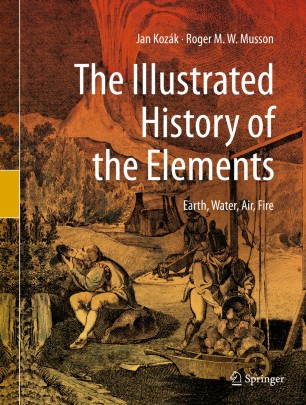 The Illustrated History of the Elements

This beautiful art book portrays the forces of nature through the main elements of Earth, Water, Air, Fire. It is composed from a large selection of unique images of a wide variety of sources, mostly private collections. It is a highly illustrated book, containing reproductions of rare engravings, maps both old and new, sketches, and diagrams.
The book is a sequel to ‘The Illustrated History of Natural Disasters’, published in 2010. While the first book provided a detailed look into two main kinds of natural disasters (of Seismic and Volcanic character), this volume presents natural disasters of all kinds: Geophysical, Hydrological, Climatological and Biological.
The book is divided into three parts: the first part introduces the leading question as to whether the elements should be regarded as constructive, for giving origin to life on Earth, or destructive given the impact of natural disasters to society throughout history; the second illustrates the positive effects of nature’s elements; and the third part depicts and contextualizes the history of natural disasters such as Earthquakes, Tsunamis, Volcano Eruptions, Landslides, Avalanches, Droughts, Storms, Fires, among others. Regardless of the fact that the order of filing the historical images in the present book according to obsolete classical four-elements concept by Empedocles and Aristotle, in the book text also a new, modern class of element-like categories, fitting the present gnosis in physics, is propound.