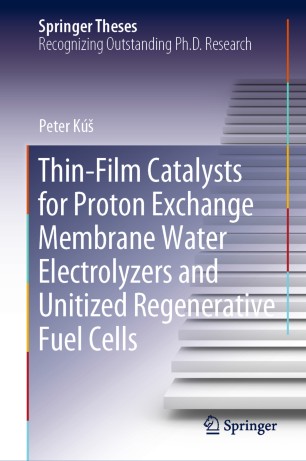 This work revolves around the hydrogen economy and energy-storage electrochemical systems. More specifically, it investigates the possibility of using magnetron sputtering for deposition of efficient thin-film anode catalysts with low noble metal content for proton exchange membrane water electrolyzers (PEM-WEs) and unitized regenerative fuel cells (PEM-URFCs). The motivation for this research derives from the urgent need to minimize the price of such electrochemical devices should they enter the mass production.

Numerous experiments were carried out, correlating the actual in-cell performance with the varying position of thin-film catalyst within the membrane electrode assembly, with the composition of high-surface support sublayer and with the chemical structure of the catalyst itself. The wide arsenal of analytical methods ranging from electrochemical impedance spectroscopy through electrochemical atomic force microscopy to photoelectron spectroscopy allowed the description of the complex phenomena behind different obtained efficiencies.

Systematic optimizations led to the design of a novel PEM-WE anode thin-film iridium catalyst which performs similarly to the standard counterparts despite using just a fraction of their noble metal content. Moreover, the layer-by-layer approach resulted in the design of a Ir/TiC/Pt bi-functional anode for PEM-URFC which is able to operate in both the fuel cell and electrolyzer regime and thus helps to cut the cost of the whole conversion system even further.