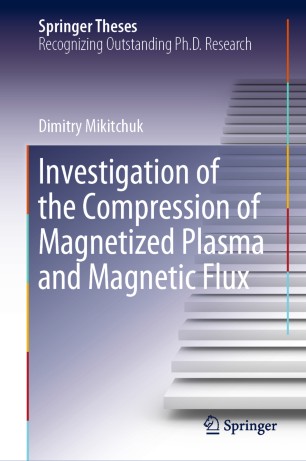 Investigation of the Compression of Magnetized Plasma and Magnetic Flux

The present research studies the fundamental physics  occurring during the magnetic flux and magnetized plasma compression by plasma implosion. This subject is relevant to numerous studies in laboratory and space plasmas. Recently, it has attracted particular interest due to the advances in producing high-energy-density plasmas in fusion-oriented experiments, based on the approach of magnetized plasma compression.
The studied configuration consists of a cylindrical gas-puff shell with pre-embedded axial magnetic field that pre-fills the anode-cathode gap. Subsequently, axial pulsed current is driven through the plasma generating an azimuthal magnetic field that compresses the plasma and the axial magnetic field embedded in it.
A key parameter for the understanding of the physics occurring during the magnetized plasma compression is the evolution and distribution of the axial and azimuthal magnetic fields. Here, for the first time ever, both fields are measured simultaneously employing non-invasive spectroscopic methods that are based on the polarization properties of the Zeeman effect. These measurements reveal unexpected results of the current distribution and the nature of the equilibrium between the axial and azimuthal fields. These observations show that a large part of the current does not flow in the imploding plasma, rather it flows through a low-density plasma residing at large radii. The development of a force-free current configuration is suggested to explain this phenomenon. Previously unpredicted observations in higher-power imploding-magnetized-plasma experiments, including recent unexplained structures observed in the Magnetized Liner Inertial Fusion experiment, may be connected to the present discovery.