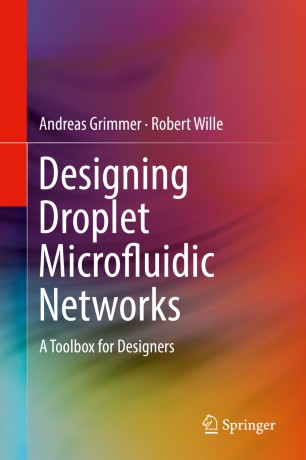 A Toolbox for Designers

This book describes automatic methods for the design of droplet microfluidic networks. The authors discuss simulation and design methods which support the design process of droplet microfluidics in general, as well as design methods for a dedicated droplet routing mechanism, namely passive droplet routing. The methods discussed allow for simulating a microfluidic design on a high-abstraction level, which facilitates early validation of whether a design works as intended, automatically dimensioning a microfluidic design, so that constraints like flow conditions are satisfied, and automatically generating meander designs for the respective needs and fabrication settings.  Dedicated methods for passive droplet routing are discussed and allow for designing application-specific architectures for a given set of experiments, as well as generating droplet sequences realizing the respective experiments.  Together, these methods provide a comprehensive “toolbox" for designers working on droplet microfluidic networks in general and an integrated design flow for the passive droplet routing mechanism in particular.

Andreas Grimmer studied Computer Science (Bachelor and Master) at the Johannes Kepler University Linz, Austria. During his studies, he was a student researcher working on program analysis methods at the laboratory for Monitoring and Evolution of Very-Large-Scale Software Systems. Afterwards, he was a researcher and teaching assistant at the Institute of Integrated Circuits, where he completed his PhD in January 2019. His PhD thesis was about the design and simulation of microfluidic devices.

Robert Wille studied Computer Science (Diploma) at the University of Bremen from 2002 to 2006. After successfully completing his doctorate in 2009 (summa cum laude), he worked as postdoc at the University of Bremen and, since 2013, as Senior Researcher in the Cyber-Physical Systems department of the German Research Center for Artificial Intelligence (DFKI). Besides that, he served as lecturer at the University of Applied Science Bremen from 2010 to 2012 and was guest professor for Technical Computer Science at the University of Potsdam in 2012 as well as for Embedded Systems at the Technical University of Dresden in 2013/2014. In 2014, he completed his habilitation and, since October 2015, he is full professor at the Johannes Kepler University Linz and head of the Department for Integrated Circuit and System Design. Robert Wille's expertise is in the development of design methods for various technologies and application areas. He considers thereby conventional as well as emerging computing technologies such as quantum computation, reversible circuits, or microfluidic biochips.