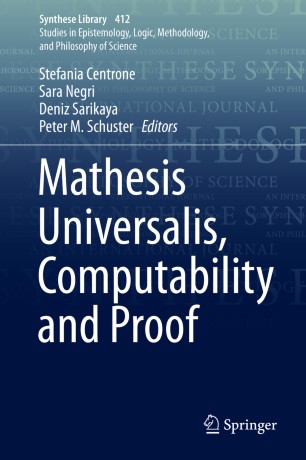 In a fragment entitled Elementa Nova Matheseos Universalis (1683?) Leibniz writes “the mathesis […] shall deliver the method through which things that are conceivable can be exactly determined”; in another fragment he takes the mathesis to be “the science of all things that are conceivable.” Leibniz considers all mathematical disciplines as branches of the mathesis and conceives the mathesis as a general science of forms applicable not only to magnitudes but to every object that exists in our imagination, i.e. that is possible at least in principle. As a general science of forms the mathesis investigates possible relations between “arbitrary objects” (“objets quelconques”). It is an abstract theory of combinations and relations among objects whatsoever.

In 1810 the mathematician and philosopher Bernard Bolzano published a booklet entitled Contributions to a Better-Grounded Presentation of Mathematics. There is, according to him, a certain objective connection among the truths that are germane to a certain homogeneous field of objects: some truths are the “reasons” (“Gründe”) of others, and the latter are “consequences” (“Folgen”) of the former. The reason-consequence relation seems to be the counterpart of causality at the level of a relation between true propositions. A rigorous proof is characterized in this context as a proof that shows the reason of the proposition that is to be proven. Requirements imposed on rigorous proofs seem to anticipate normalization results in current proof theory.

The contributors of Mathesis Universalis, Computability and Proof,  leading experts in the fields of computer science, mathematics, logic and philosophy, show the evolution of these and related ideas exploring topics in proof theory, computability theory, intuitionistic logic, constructivism and reverse mathematics, delving deeply into a contextual examination of the relationship between mathematical rigor and demands for simplification.