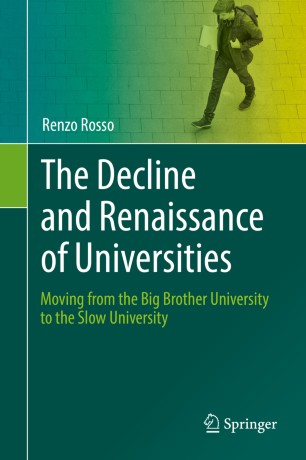 The Decline and Renaissance of Universities

Moving from the Big Brother University to the Slow University

Instead of following the Magna Charta Universitatum, the declaration of the principles of knowledge signed in 1988 in Bologna, the academic approach pursued in Europe and the other continents over the past 30 years has strictly employed a utilitarian model of higher education. This jeopardizes academic freedom, shared governance and tenure, the three pillars of the long-established model of universities. Scientific conformism and fragmentation, educational bias and authoritarianism are the major drawbacks, together with a poor readiness to meet the emerging challenges in the labor market and technology. In this book, Renzo Rosso presents a new model for countering these developments, e.g. by establishing novel democratic rules for university governance. The Slow University paradigm positions culture and education as essential tools for the long-term survival of humankind.

Renzo Rosso has been a Professor at the Department of Civil and Environmental Engineering at the Politecnico di Milano, Italy, since 1986. He received the Borland Award for Hydrology in 2005, and the Henry Darcy Medal from the European Geosciences Union in 2010 for his research contributions to water science and engineering. He has been an advisor to national and international scientific agencies, an elected member of the Academic Senate and the head of the Faculty of Environmental Engineering at the Politecnico di Milano, and director of an interuniversity Doctoral Program in Water Engineering and of an International Master’s Program in Water Resources Management. The author of 8 research books, 3 university-level textbooks, 3 essays, one novel and over 400 papers (more than 100 in SCI journals) in the fields of hydrology, water resources, river engineering, climate and glaciology, fluvial geomorphology, reliability analysis, stochastic processes, nonlinear dynamics and fractals. His current activities include science and higher education communication as a columnist for national newspapers and magazines.