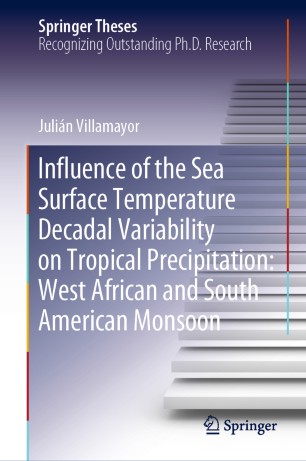 In this book the Sea Surface Temperature (SST) patterns of decadal-to-multidecadal variability observed and simulated by 17 general circulation models (GCMs) are analyzed. Furthermore, their impact on precipitation in West Africa and South America and the atmospheric mechanisms involved are assessed. Through this analysis, the effect of external forcings on these impacts and the relative contribution of decadal-to-multidecadal variability patterns of SST to precipitation are presented in depth. Finally, a humid period in the West African region of the Sahel during the 19th century, previously little documented, is analyzed using an atmospheric GCM.
The monsoons of West Africa and South America have shown changes in the timescales of a few decades. Previous work suggests a relationship with patterns of decadal-to-multidecadal variability of SST, such as global warming and the Atlantic and Pacific variability. However, the dynamics underlying this relationship and its simulation by current GCMs had not been addressed in a consistent manner. This is the main motivation of this book. The results of this book not only represent a great step forward in our understanding of the changes in the precipitation regimes of the studied regions, but they can also be of great help for the improvement of decadal prediction systems and the associated social consequences.