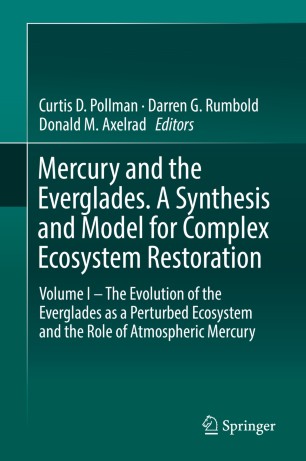 Mercury and the Everglades. A Synthesis and Model for Complex Ecosystem Restoration

This book integrates 30 years of mercury research on the Florida Everglades to inform scientists and policy makers. The Everglades is an iconic ecosystem by virtue of its expanse; diversity of biota; and multiple international designations. Despite this, the Everglades has been subjected to multiple threats including: habitat loss, hydrologic alterations, invasive species; and altered water quality. Less well recognized as a threat to Everglades human use and wildlife populations is the toxic metal, mercury. This Volume focuses on sources of mercury to the Everglades from the late-1980’s when there was bewilderment as to why there were very high levels of mercury in the Everglades food web. Soon came the finding that mercury loadings from atmospheric deposition accounted for over 95% of total input to the Everglades which resulted in Florida conducting the most comprehensive mercury monitoring and modeling study performed to date. Topics discussed in this Volume include: (1) Why atmospheric deposition fluxes of mercury to the Everglades are amongst the highest in the U.S; (2) That these are overwhelmingly from sources outside of the U.S; (3) That mitigation strategies for resolving the elevated food web mercury problem in the Everglades that rely solely on reducing atmospheric mercury inputs will not be effective for many decades; (4) That consideration of other strategies, in particular controlling factors related to Everglades mercury biogeochemical cycling seem warranted.