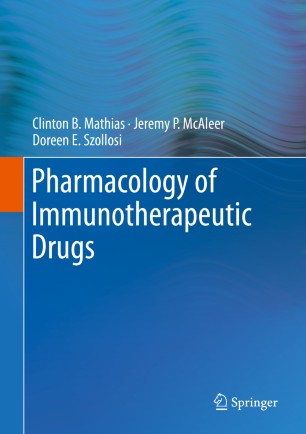 Medicine has entered a golden age in which therapeutic agents are becoming widely available due to advances in basic science and technology. As such, many drugs have been developed that target inflammatory processes and/or the immune system. This book is intended for health professionals examining the modulation of inflammation by immunotherapeutic drugs.
The immune system fills the primordial role of host defense and resistance to infections with pathogenic microorganisms. Several hematopoietic-derived cells constituting the innate and adaptive immune systems cooperate to provide barriers for microbial colonization and/or promote pathogen destruction within the host. Conversely, many immune cells are also involved in the pathogenesis and propagation of chronic inflammatory diseases. The beginning of this book details various components of the immune system including the cell types, lymphoid tissues, soluble cytokines and surface molecules that are essential for host defense. Breakdowns in immune tolerance, or dysregulated immune responses to antigens derived from self tissues or innocuous sources, can lead to the development of autoimmunity or chronic inflammatory diseases. Pathophysiologic roles for the immune system are detailed in corresponding chapters on autoimmunity, epithelial surfaces (lungs, skin, intestine), and transplantation, with special emphasis placed on immunotherapeutic drug targets. The last section of the book focuses on treatments that stimulate our immune system to specifically target and fight infectious diseases and cancer.  In each chapter, the medications used to treat various diseases/conditions in terms of their mechanism of action and other pharmacologic properties are discussed in detail. Chapters begin with a table showing drug names and classifications. The importance of basic science and clinical trials cannot be understated in the context of drug development.  As such, the discovery of certain medications that had a lasting impact in medicine and pharmacy are highlighted in chapter subsections named “Bench to Bedside.”  Several clinical applications of immunotherapeutic drugs are described within end-of -chapter case studies including practice questions.
The Pharmacology of Immunotherapeutic Drugs is a reference for immunologists and clinicians (medical doctors, pharmacists, nurses) examining the modulation of inflammatory processes by a variety of medications targeting the cells and mediators of our immune system.​

Dr. Clinton Mathias received his Ph.D. in Biomedical Sciences with a concentration in Immunology from the University of Connecticut, where he studied the role of innate immune cells in the modulation of allergic asthma. His postdoctoral work at Boston Children’s Hospital and Harvard Medical School focused on elucidating mechanisms regulating mast cell homeostasis and function in models of IgE-dependent asthma and food allergy. He is a founding faculty member of the Western New England University College of Pharmacy, where he teaches immunology, infectious diseases, and the pharmacology of immunotherapeutic drugs. His research interests are aimed at examining the genetic and environmental factors that govern mast cell responses during allergic inflammation.

Dr. Jeremy McAleer received his Ph.D. in Biomedical Science from the University of Connecticut where he studied the adjuvant effects of lipopolysaccharide on T cells.  His postdoctoral work at Louisiana State University and the University of Pittsburgh focused on the regulation of pulmonary T cell immunity by commensal microbiota.  In 2014, he joined the faculty at Marshall University School of Pharmacy in Huntington, WV, where he teaches immunology and pharmacology and conducts research on the regulation of T cell immunity by environmental factors.

Dr. Doreen Szollosi received her Ph.D. in Pathobiology from Brown University where she studied immunosuppression and lymphocyte apoptosis in a mouse model of polymicrobial sepsis at Rhode Island Hospital in Providence. She is a founding faculty member of the University of Saint Joseph School of Pharmacy in Hartford, CT where she enjoys teaching pharmacy students about the pharmacology of antimicrobials as well as drugs that affect the immune system. Her current research interests include studying the mechanisms of novel anti-inflammatory agents with dual pro-inflammatory cytokine and chemokine suppressive effects.