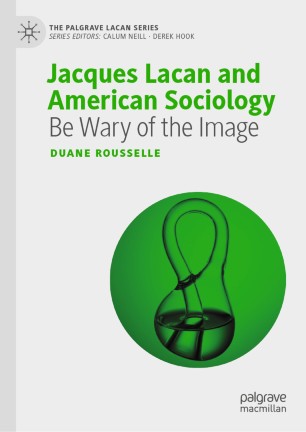 Be Wary of the Image

“In Jacques Lacan and Early American Sociology, Duane Rousselle deftly interrogates how the thought of Jacques Lacan can illuminate and remedy some shortcomings of the early American sociologists and especially those influenced by the pragmatism of William James, John Dewey, and Charles Peirce. Rousselle’s book is a unique, insightful exploration not just of what Lacanian theory can do, but also of the resonances and impasses between psychoanalysis and sociology more generally. This is an exciting contribution to a growing literature in Psychosocial Studies.”

—John Andrews, Visiting Scholar at New York University, USA, and co-editor of The Unhappy Divorce of Sociology and Psychoanalysis

In this Palgrave Pivot, Duane Rousselle aims to disrupt the hold that pragmatist ideology has had over American sociology by demonstrating that the social bond has always been founded upon a fundamental and primordial bankruptcy. Using the Lacanian theory of “capitalist discourse,” Rousselle demonstrates that most of early American sociology suffered from an inadequate account of the “symbolic” within the mental and social lives of the individual subject. The psychoanalytic aspect of the social bond remained theoretically undeveloped in the American context. Instead it is the “image,” a product of the imaginary, which takes charge over any symbolic function. This intervention into pragmatic sociology seeks to recover the tradition of “grand theory” by bringing psychoanalytical and sociological discourse into fruitful communication with one another.