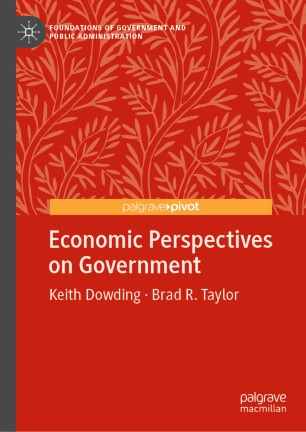 “Dowding and Taylor offer student and scholar alike a clear and compelling perspective on the foundations of political economy. Their narrative coherently frames the scholarship of the last half century, and persuasively applies it to the recurring problems facing groups, markets, and whole societies.”
—Kenneth A. Shepsle, Harvard University, USA
This book introduces and applies the economic way of thinking to public policy and public administration. It provides a non-technical introduction and assumes no prior economic or mathematical training but looks closely at the methodological and normative assumptions underlying economic analysis. It provides a deep understanding of the method than a simple technical presentation would allow. After introducing the basic assumptions of the economic method, the book considers the analysis of market failure, the role of government in a market economy, behavioural economics, bargaining in government, bureaucracy, interest groups, and levels of government. By providing a balanced introduction to and overview of economic approaches to government, the book will be useful to undergraduate and postgraduate students in public administration and public policy, as well as academics and practitioners in these fields interested in the application of the economic way of thinking.
Keith Dowding is Distinguished Professor of Political Science and Political Philosophy at the Australian National University, Australia. His latest books are Power, Luck and Freedom: Collected Essays (2017), Policy Agendas in Australia (with Aaron Martin, 2017) and The Philosophy and Methods of Political Science (2016).
Brad R. Taylor is Lecturer in Economics and Political Economy at the University of Southern Queensland, Australia. He is co-author (With Andrew Hindmoor) of Rational Choice, 2nd Edition (2015).