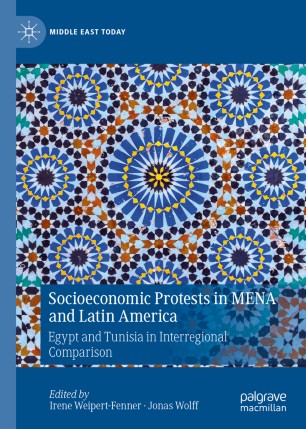 Egypt and Tunisia in Interregional Comparison

Chapter 10 of this book is available open access under a CC BY 4.0 license at link.springer.com.

Jonas Wolff is Head of the Research Department “Intrastate Conflict” and executive board member of the Peace Research Institute Frankfurt (PRIF), Germany.

Jonas Wolff is Head of the Research Department “Intrastate Conflict” and executive board member of the Peace Research Institute Frankfurt (PRIF), Germany.

“This book breaks new ground in its approach to comparison and theory building.  It presents original analyses of socio-economic protest in the little studied cases of Egypt and Tunisia in light of theory generated in more extensively studied cases across Latin America. The result is at once a major intra-regional study of socio-economic grievance in the MENA region and how it opens space for larger uprisings that make demands for major regime change, at the same time that it builds cross-regional theory about dilemmas of different movement strategies concerning autonomy, politicization, and decentralization.  The result is a new model of comparative analysis as well as a novel analysis of the Arab spring.” (Ruth B. Collier, Professor, University of California, Berkeley, USA)

“In Socioeconomic Protests in MENA and Latin America, Irene Weipert-Fenner and Jonas Wolff made a unique in its kind double comparative effort. They put together a group of stellar scholars to comparatively analyze the revolts for democratization in Tunisia and Egypt through the lenses of the Latin American literature. The role of trade unions and popular movements in South America’s dynamics of democratization and the struggles for reincorporation are interconnected with the cross-national comparative analysis of Tunisia and Egypt to understand the political economy of these dynamics. This thought provoking volume offers a new inter-regional research agenda that will certainly redefine the current debates in the MENA.” (Federico M. Rossi, Professor, CONICET-National University of San Martín, Argentina, and author of The Poor’s Struggle for Political Incorporation)

“Socioeconomic Protests in MENA and Latin America stands out among a crowded field of books on the 2011 uprisings in Tunisia and Egypt. Easily one of the most theoretically rich frameworks to date, Weipert-Fenner and Wolff led a collection of scholars through a multi-year project that examined not the uprisings per se but protests dealing with economic grievances and inequalities that began well before the uprisings and continued after the largest crowds went home. The result is an empirically and theoretically rich set of contributions that, unlike most edited volumes, cohere into a whole that is greater than even its excellent parts. This book is a must read for its substantive engagement with the contentious politics literature and its rich original empirical material. The shadow comparison with socioeconomic protests in Latin American further extends the reach of this collection well beyond those interested primarily in the MENA region.” (Jillian Schwedler, Professor, City University of New York, USA)

“This groundbreaking volume offers a theoretically persuasive and empirically rich account of the role of socioeconomically motivated contentious action against the politics of austerity during the Arab Spring and its aftermath. In a tightly crafted, flexible analytical framework that combines structure, agency, and contingency, a comparison to broadly similar cycles of protest in Latin America drives home a crucial the point.  The dynamics of contention of the Arab Spring and its political consequences were not just the product of distinctive culture or the diffusion of democratic norms but decisively linked to world historical political-economic trends – a brilliant synthesis of social movement theorizing and comparative political economy.” (Eduardo Silva, Professor, Tulane University, New Orleans, USA)