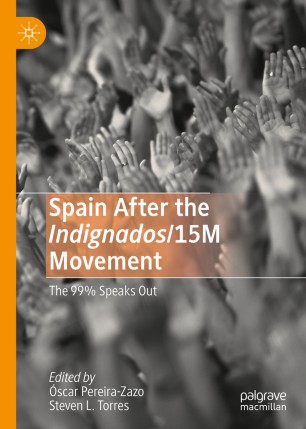 Spain After the Indignados/15M Movement

Spain After the Indignados/15M Movement explores how the aftershocks of the 2007 Great Recession restructured Spain’s political sphere and political imaginary. It brings together a representative sample of Spain’s leading progressive voices, including two of the five founding members of the Podemos party. The essays herein explore the areas of economics, politics, ecology, social change, media, and cultural politics in order to present a broad, critical account of contemporary Spain, with a special emphasis on emerging forms of sociopolitical contestation, self-organizing, democratic participation, and radical politics. The edited volume argues that Spanish cultural studies—which originally gravitated toward celebratory accounts of capitalist modernization, the cultural Movida and the advent of a postmodern Spain—must continue to build a new cultural politics that not only challenges the accepted narrative of the Spanish Transition to democracy, but that is committed to confronting the civilizatory challenges currently faced.

Óscar Pereira-Zazo teaches Spanish literature and cultural theory at the University of Nebraska–Lincoln, USA. He is author of El Análisis de la Comunicación en Español and De cómo el Libro de buen amor llegó a serlo, and co-editor of two critical editions of the Book of the Archpriest of Hita.

Steven L. Torres teaches Spanish and Spanish literature and culture at the University of Nebraska Omaha, USA. He is a co-founder of ALCESXXI. Much of his research focusses on metacultural discourse and the complex relation between culture and politics. He is author of Discurso metacultural en España: Miguel de Unamuno.