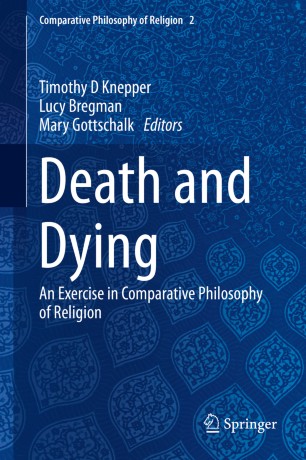 An Exercise in Comparative Philosophy of Religion

The medicalization of death is a challenge for all the world's religious and cultural traditions. Death's meaning has been reduced to a diagnosis, a problem, rather than a mystery for humans to ponder. How have religious traditions responded? What resources do they bring to a discussion of death's contemporary dilemmas? This book offers a range of creative and contextual responses from a variety of religious and cultural traditions. It features 14 essays from scholars of different religious and philosophical traditions, who spoke as part of a recent lecture and dialogue series of Drake University’s The Comparison Project. The scholars represent ethnologists, medical ethicists, historians, philosophers, and theologians--all facing up to questions of truth and value in the light of the urgent need to move past a strictly medicalized vision.

Timothy Knepper is a professor of philosophy at Drake University, where he directs The Comparison Project, a public program in global, comparative religion and local, lived religion. He is the author of books on the future of the philosophy of religion (The Ends of Philosophy of Religion, Palgrave, 2013) and the sixth-century Christian mystic known as Pseudo-Dionysius the Areopagite (Negating Negation, Wipf & Stock, 2014). He is also the editor of a student-written, photo-narrative about religion in Des Moines (A Spectrum of Faith, Drake Community Press, 2017) and The Comparison Project’s lecture and dialogue series on ineffability (Ineffability: An Exercise in Comparative Philosophy of Religion, Springer, 2017). The Comparison Project programming currently includes a biennial lecture and dialogue series, a monthly series of open houses at faith communities, an annual interfaith youth camp, and on-line guides to the “religions of Des Moines.”
Lucy Bregman received her Ph.D. from the University of Chicago Divinity School. She is now Professor of Religion at Temple University in Philadelphia PA. She is the author of multiple books on death and dying, including Death in the Midst of Life: Perspectives on Death from Depth Psychology and Christianity (Baker Book House, 1992), Beyond Silence and Denial: Death and Dying Reconsidered (Westminster, 1999) and Preaching Death: The Transformation of American Funeral Sermons (Baylor, 2012). She has been active in the American Academy of Religion, and has Chaired the program unit on Death, Dying and Beyond. She loves to kayak on lakes.
Mary Gottschalk served as an adjunct professor at Drake from fall 2015 through spring 2017.  In conjunction with The Comparison Project, she co-taught an undergraduate honors course on Comparative Religion that explored the theologies of death and rituals of dying. Mary’s focus was on the conflict between religious traditions and modern medical practices. Her interest in bio-ethics and religion—an avocation rather than a career—began six years ago with issues of aging, and has expanded to include the intersection of bioethics and religion on a wide variety of medical innovations and procedures. Mary’s professional background was in the global financial markets. The author of a memoir and a novel, she also works as a freelance writer and editor. Mary has a B.A. from the University of Chicago and a M.B.A. from the University of Cincinnati.