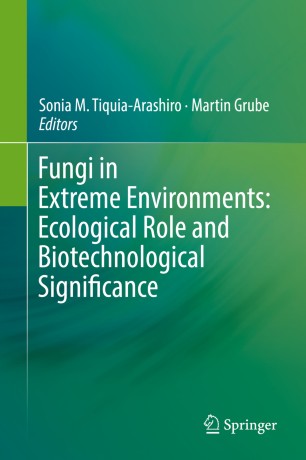 Over the last decades, scientists have been intrigued by the fascinating organisms that inhabit extreme environments.  These organisms, known as extremophiles, thrive in habitats which for other terrestrial life-forms are intolerably hostile or even lethal. Based on such technological advances, the study of extremophiles has provided, over the last few years, ground-breaking discoveries that challenge the paradigms of modern biology.  In the new bioeconomy, fungi in general,  play a very important role in addressing major global challenges, being instrumental for improved resource efficiency, making renewable substitutes for products from fossil resources, upgrading waste streams to valuable food and feed ingredients, counteracting life-style diseases and antibiotic resistance through strengthening the gut biota, making crop plants more robust to survive climate change conditions, and functioning as host organisms for production of new biological drugs. This range of new uses of fungi all stand on the shoulders of the efforts of mycologists over generations.

The book is organized in five parts: (I) Biodiversity, Ecology, Genetics and Physiology of Extremophilic Fungi, (II) Biosynthesis of Novel Biomolecules and Extremozymes (III) Bioenergy and Biofuel synthesis, and (IV) Wastewater and biosolids treatment, and (V) Bioremediation.