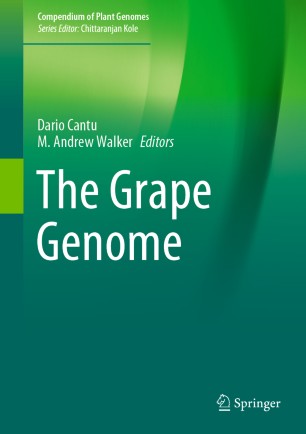 This book describes the current state of international grape genomics, with a focus on the latest findings, tools and strategies employed in genome sequencing and analysis, and genetic mapping of important agronomic traits. It also discusses how these are having a direct impact on outcomes for grape breeders and the international grape research community. While V. vinifera is a model species, it is not always appreciated that its cultivation usually requires the use of other Vitis species as rootstocks. The book discusses genetic diversity within the Vitis genus, the available genetic resources for breeding, and the available genomic resources for other Vitis species.
Grapes (Vitis vinifera spp. vinifera) have been a source of food and wine since their domestication from their wild progenitor (Vitis vinifera ssp. sylvestris) around 8,000 years ago, and they are now the world’s most valuable horticultural crop. In addition to being economically important, V. vinifera is also a model organism for the study of perennial fruit crops for two reasons: Firstly, its ability to be transformed and micropropagated via somatic embryogenesis, and secondly its relatively small genome size of 500 Mb. The economic importance of grapes made V. vinifera an obvious early candidate for genomic sequencing, and accordingly, two draft genomes were reported in 2007. Remarkably, these were the first genomes of any fruiting crop to be sequenced and only the fourth for flowering plants. Although riddled with gaps and potentially omitting large regions of repetitive sequences, the two genomes have provided valuable insights into grape genomes. Cited in over 2,000 articles, the genome has served as a reference in more than 3,000 genome-wide transcriptional analyses. Further, recent advances in DNA sequencing and bioinformatics are enabling the assembly of reference-grade genome references for more grape genotypes revealing the exceptional extent of structural variation in the species.