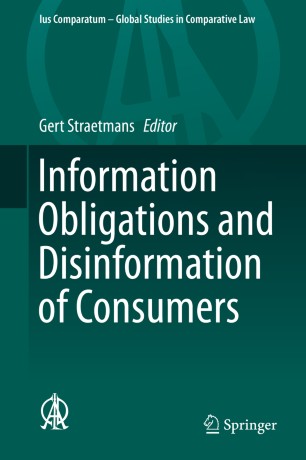 Information Obligations and Disinformation of Consumers

This book focuses on recent developments in consumer law, specifically addressing mandatory disclosures and the topical problem of information overload. It provides a comparative analysis based on national reports from countries with common law and civil law traditions in Asia, America and Europe, and presents the reports in the form of chapters that have been drafted on the basis of a questionnaire, and which use the same structure as the questionnaire to allow them to be easily compared.
The book starts with an analysis of the basic assumptions underlying the current consumer protection models and examines whether and how consumer models adapt to the new market conditions. The second part addresses the information obligations themselves, first highlighting the differences in the reported countries before narrowing the analysis down to countries with a general pre-contractual information duty, particularly the transparency requirements that often come with such a duty. The next part examines recent developments in the law on food labelling, commercial practices and unfair contract terms in order to identify whether similar traits can be found in European and non-European jurisdictions. The fourth part of the book focuses on specific information obligations in the financial services and e-commerce sectors, discussing the fact that legislators are experimenting with different forms of summary disclosures in these sectors. The final part provides a critical appraisal of the recent developments in consumer information obligations, addressing the question of whether the multiple criticisms from behavioural sciences necessitate abandonment or refinement of current consumer information models in favour of new, more adequate forms of consumer protection, and providing suggestions.

Gert Straetmans is full professor at the faculty of law of the University of Antwerp. He teaches European economic, consumer and commercial law. He served as Dean of the Law Faculty (2008-2012) and is a member of the Research Group on the Existing EC Private Law (Acquis Group). He was the Belgian expert involved in the European Consumer Compendium Group (2006-2013), and participated as senior expert in various research projects financed by the European Commission (most recently the update of the Consumer Law Database). He is senior fellow of the Zentrum für Europäische Integrationsforschung, Rheinische Friedrich-Wilhelms Universität zu Bonn, associate-member of the International Academy of Comparative Law and a member of the European Law Institute, Vienna. He has a longstanding expertise in commercial/economic law, competition law, European substantive law and (European) consumer law. He lectured at the Universities of Bonn, Hong Kong, Leyden, Pretoria and Toulouse I Capitole. He is the author of numerous publications in the fields of EU Law and Belgian Commercial and Consumer Law.