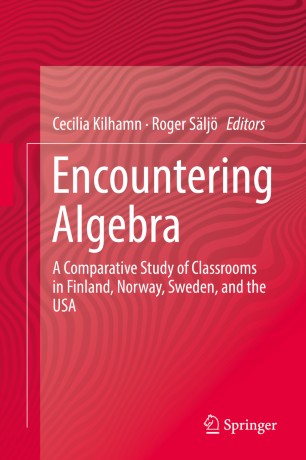 A Comparative Study of Classrooms in Finland, Norway, Sweden, and the USA

The book reports a comparative research project about algebra teaching and learning in four countries. Algebra is a central topic of learning across the world, and it is well-known that it represents a hurdle for many students. The book presents analyses built on extensive video-recordings of classrooms documenting the first introduction to symbolic algebra (students aged 12 to 14). While the content addressed in all classrooms is variables, expressions and equations, the teaching approaches are diverse. The chapters bring the reader into different algebra classrooms, discussing issues such as mathematization and social norms, the role of mediating tools and designed examples, and teacher beliefs. By comparing classrooms, new insights are generated about how students understand the algebraic content, how teachers instruct, and how both parties deal with difficulties in learning elementary algebra. The book also describes a research methodology using video in search of taken-for-granted aspects of algebra lessons.

Cecilia Kilhamn received her Ph. D. in Mathematics Education 2011 at Gothenburg University. Cecilia has a background as an elementary school teacher and has worked with teacher education the last 15 years. Her main interest is mathematics education in primary and elementary school, with a particular focus on early algebra. After her dissertation she was responsible for the Swedish part of an international research project involving four countries (VIDEOMAT). The project included conducting interviews and video observations in algebra classrooms and making in-depth as well as comparative analyses of video data. A research interest in the use of mathematical language, representations and metaphors that was initiated in her thesis has been further developed in several projects in recent years, including collaborations with colleagues at Mathematics in the City at City College of New York. In her work with in-service teachers, Cecilia has also supervised many Learning Studies, where the use of Variation theory is a main feature. In addition to her research interests and teaching duties Cecilia writes material for teachers, and translates and reviews American or English books about mathematics education. She is a member of the board of the Swedish Society for Mathematics Education (SMDF) and part of the Nordic Network for Algebra Learning (N2AL). Cecilia is currently a guest editor for the Nordic mathematics education research journal NOMAD.

Roger Säljö specializes in research on learning, interaction and human development in a sociocultural perspective, where he has published extensively. Much of this work is related to issues of how people learn to use cultural tools and how we acquire competences and skills that are foundational to learning in a socially and technologically complex society. In recent years, he has worked extensively with issues that concern how digital technologies transform human learning practices inside and outside formal schooling. In this field, he has been responsible for a national research program, LearnIT, funded by the Swedish Knowledge-foundation and involving collaboration with many universitie. He has also been engaged in interdisciplinary work with colleagues from a range of different disciplines including medicine and health, various natural sciences, linguistics, informatics and several others. Since 2006 he is Director of the Linnaeus Centre for Research on Learning, Interaction and Mediated Communication in Contemporary Society (LinCS), a national centre of excellence (CoE) funded by the Swedish Research Council (2006-2018). He has been a Finland Distinguished Professor (FiDiPro) of the Academy of Finland, placed at the Centre for Learning Research at the University of Turku/Åbo in Finland. He is an honorary doctor at the University of Turku and the University of Agder, and honorary professor at the University of Bath, UK. Previously he has been visiting professor at a number of universities, including Universität Konstanz, University of California San Diego, Rijksuniversiteit Utrecht, University of Oslo, Georg-August-Universität Göttingen, University of Agder, University of Stavanger. Roger Säljö is a member of editorial boards of a large number of scientific journals and a founding co-editor of Learning, Culture and Social Interaction. He has supervised 50 students at six different faculties to their Ph. D. degrees. He has published almost 500 articles, chapters, books and other scholarly publications.

“This book is a valuable resource for those who are interested in studying either the teaching and learning of algebra or similarities and differences in mathematics instruction around the world. … the book provides an interesting and enlightening glimpse into how algebra is introduced to students around the world.” (Erica R. Miller, MAA Reviews, May 24, 2020)