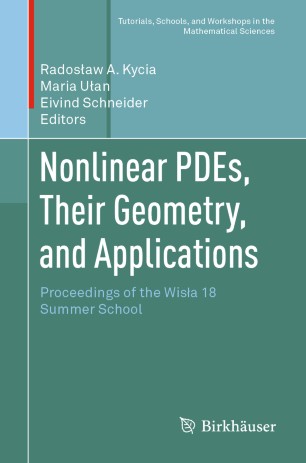 Nonlinear PDEs, Their Geometry, and Applications

Proceedings of the Wisła 18 Summer School

Part of the Tutorials, Schools, and Workshops in the Mathematical Sciences book series (TSWMS)

This volume presents lectures given at the Summer School Wisła 18: Nonlinear PDEs, Their Geometry, and Applications, which took place from August 20 - 30th, 2018 in Wisła, Poland, and was organized by the Baltic Institute of Mathematics. The lectures in the first part of this volume were delivered by experts in nonlinear differential equations and their applications to physics. Original research articles from members of the school comprise the second part of this volume. Much of the latter half of the volume complements the methods expounded in the first half by illustrating additional applications of geometric theory of differential equations. Various subjects are covered, providing readers a glimpse of current research. Other topics covered include thermodynamics, meteorology, and the Monge–Ampère equations.
Researchers interested in the applications of nonlinear differential equations to physics will find this volume particularly useful. A knowledge of differential geometry is recommended for the first portion of the book, as well as a familiarity with basic concepts in physics.