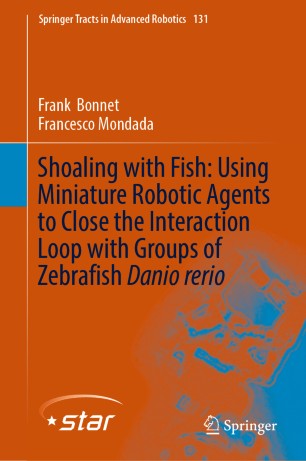 In this book, we present novel robotized tools that can integrate shoals of fish in order to study their collective behaviors. We used the current state of the art on the zebrafish social behavior to define the specifications of the robots, and we performed stimuli analysis to improve their developments. Bio-inspired controllers were designed based on data extracted from experiments with zebrafish for the robots to mimic the zebrafish locomotion underwater.

Experiments involving mixed groups of fish and robots qualified the robotic system to be integrated among a zebrafish shoal and to be able to influence the collective decisions of the fish. These results are very promising for the field of animal-robot interaction studies, as we showed the effect of the robots in long-duration experiments and repetitively, with the same order of response from the animals.