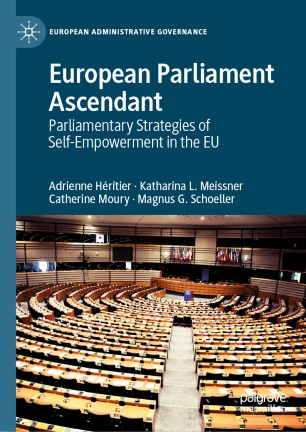 Parliamentary Strategies of Self-Empowerment in the EU

This book analyses the European Parliament’s strategies of self-empowerment over time stretching across cases of new institutional prerogatives as well as substantive policy areas. It considers why and how the Parliament has managed to gain formal and informal powers in this wide variety of cases. The book provides a systematic and comparative analysis of the European Parliament’s formal and informal empowerment in two broad sets of cases: on the one hand, it examines the EP’s empowerment since the Treaty of Rome in three areas that are characteristic of parliamentary democracies, namely legislation, the budget, and the investiture of the executive. On the other hand, it analyses the European Parliament’s role in highly politicised policy areas, namely Economic and Monetary Governance and the shaping of EU trade agreements.
Adrienne Héritier is Emeritus Professor of Social and Political Sciences at the European University Institute, Italy. Her research focuses on European policy-making, comparative public policy, European decision making processes, theories of institutional change and deregulation, and re-regulation and new modes of governance.
Katharina L. Meissner is an assistant professor at the Centre for European Integration Research (EIF), Department of Political Science, University of Vienna, Austria. Her research interests include European Union Foreign Policy, International Trade and Security Relations, International Political Economy and Regional Integration.
Catherine Moury is Senior Lecturer in the Department of Political Studies, at the New University of Lisbon, Portugal. Her current research is focused on Comparative Politics and EU studies.
Magnus G. Schoeller is a postdoctoral researcher at the Centre for European Integration Research (EIF), Department of Political Science, University of Vienna, Austria. His work focuses on European politics, EU economic and monetary policy, and political leadership.