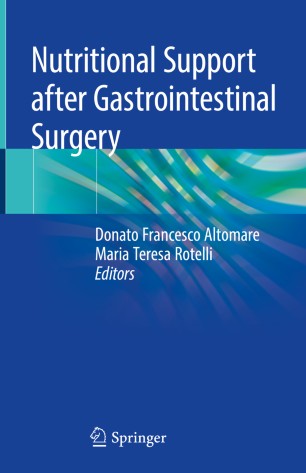 This volume provides readers with the necessary information to select the most appropriate nutritional support following gastrointestinal tract surgery.

Most patients are worried about resuming oral intake, particularly when the surgery  has altered the  GI tract normal physiology removing organs (e.g. total colectomy) or part of them, or modifying the natural sequence of the different GI tract parts (e.g. after esophagectomy or pancreatectomy). Patients may also worry about the possible complications of an inappropriate alimentation.

As a matter of fact, several metabolic processes can be modified by GI tract surgery (e.g. major liver resection or pancreatectomy),  thus making the nutritional support  essential:  and the same support is fundamental in  bariatric surgery, nowadays  widely used for super-obese patients. There is therefore a need for a nutritional guide in surgery and in troubleshooting postoperative cases where nutrition is a major issue

This book offers nutritionists insights into the possible alterations of GI tract physiology occurring after surgery, and will be a valuable resource for surgeons, gastroenterologists, coloproctologists, nutritionists and clinical specialist nurses, seeking guidance on postoperative nutrition.

Professor Donato Francesco Altomare is an associate professor at the Department of Emergency and Organ Transplantation of the University of Bari, Italy. From 2007 to 2014 he was  head of the  Residency School in  General Surgery at the same University. In 2011 he was a visiting professor at Stony Brook University, Long Island, New York, USA. His publications include 182 scientific articles cited in PubMed and 23 Chapters in national/international books. He plays executive roles in various scientific societies.

Dr.  Maria Teresa Rotelli, PhD, obtained a degree in Biological Sciences from the University of Bari, Italy in 1996, and In 2007 she was concluded her residency in Clinical Pathology at the same University, where she still works in the Department of Emergency and Organ Transplantation. From 1996 to 1998 she was a research associate at the Department of Pathology at the Pittsburgh Cancer Institute-University School of Medicine, USA. From 2012 to 2015 she acted as a scientific consultant for THD S.p.A. of Correggio, which develops advanced solutions for colorectal treatment. She owns the international patent for the “Method for the diagnosis of a carcinoma and uses thereof (PCT/IT 2010  000484)” and has published  21 articles. She has experience in several areas of dietetics/nutrition and she is Certified Nutritional Specialist.