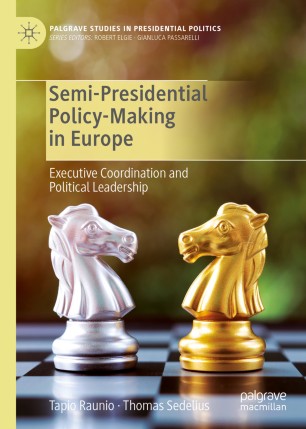 This book explores how power-sharing between the president and the prime minister works in semi-presidential regimes. In contrast to much of the existing comparative work on semi-presidentialism, the book emphasizes the role of institutional coordination at the most concrete level of executive policy-making, and asks how institutional coordination between the president and prime minister influences presidential activism and the balance of power within the executive. The authors develop a tentative framework embedded in institutionalism and based on four strands of research – semi-presidentialism, public administration, political leadership, and foreign policy analysis – which is subsequently applied to the cases of Lithuania, Romania and Finland. Given the political challenges facing many semi-presidential countries, the study ultimately seeks to identify institutional solutions that facilitate power-sharing and successful policy-making.

Tapio Raunio is Professor of Political Science at Tampere University, Finland. His research interests include legislatures and political parties, the Europeanization of domestic politics, semi-presidentialism, and the Finnish political system. He has published articles in many leading journals, including European Journal of Political Research, Journal of Common Market Studies, Party Politics, Scandinavian Political Studies, and West European Politics.

Thomas Sedelius is Professor of Political Science at Dalarna University, Sweden. His research focuses on political institutions in new democracies and transitional regimes. His previous work on semi-presidentialism has appeared in leading journals such as British Journal of Political Science, Democratization, and Government and Opposition. In 2015, his article with Olga Mashtaler “Two Decades of Semi-Presidentialism” received the East European Politics Prize.