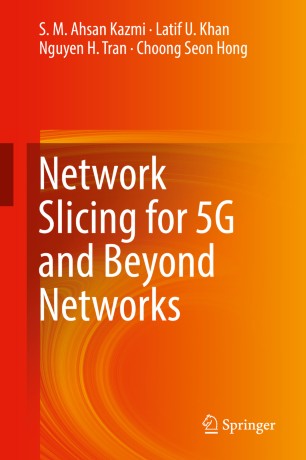 Network Slicing for 5G and Beyond Networks

This book provides a comprehensive guide to the emerging field of network slicing and its importance to bringing novel 5G applications into fruition. The authors discuss the current trends, novel enabling technologies, and current challenges imposed on the cellular networks. Resource management aspects of network slicing are also discussed by summarizing and comparing traditional game theoretic and optimization based solutions. Finally, the book presents some use cases of network slicing and applications for vertical industries. Topics include 5G deliverables, Radio Access Network (RAN) resources, and Core Network (CN) resources.

Nguyen H. Tran (S’10–M’11) received the B.S. degree from Ho Chi Minh City University of Technology, Ho Chi Minh City, Vietnam, and the Ph.D. degree from Kyung Hee University, Seoul, South Korea, in electrical and computer engineering, in 2005 and 2011, respectively. Since 2012, he has been an Assistant Professor in the Department of Computer Science and Engineering, Kyung Hee University. His research interests include applying analytic techniques of optimization, game theory, and stochastic modeling to cutting-edge applications, such as cloud and mobileedge computing, datacenters, 5G, and big data for networks. He received the Best KHU Thesis Award in engineering in 2011 and several best paper awards, including the IEEE ICC 2016, the APNOMS 2016, and the IEEE ICCS 2016. He is the Editor of the IEEE Transactions on Green Communications and Networking.

Choong Seon Hong (AM’95–M’07–SM’11) received the B.S. and M.S. degrees in electronic engineering from Kyung Hee University, Seoul, South Korea, and the Ph.D. degree from Keio University, Tokyo, Japan, in 1983, 1985, and 1997, respectively. In 1988, he joined KT, where he worked on broadband networks as a Member of the Technical Staff. In September 1993, he joined Keio University. He was with the Telecommunications Network Laboratory, KT, as a Senior Member of Technical Staff and as the Director of the Networking Research Team until August 1999. Since September 1999, he has been a Professor in the Department of Computer Science and Engineering, Kyung Hee University. His research interests include future Internet, ad hoc networks, network management, and network security. He has served as a General Chair, a TPC Chair/Member, or an Organizing Committee Member for International conferences, such as NOMS, IM, APNOMS, E2EMON, CCNC, ADSN, ICPP, DIM, WISA, BcN, TINA, SAINT, and ICOIN. He is currently an Associate Editor of the IEEE Transactions on Services and Networks Management, International Journal of Network Management, Journal of Communications and Networks, and an Associate Technical Editor of the IEEE Communications Magazine. He is a member of ACM, IEICE, IPSJ, KIISE, KICS, KIPS, and OSIA.