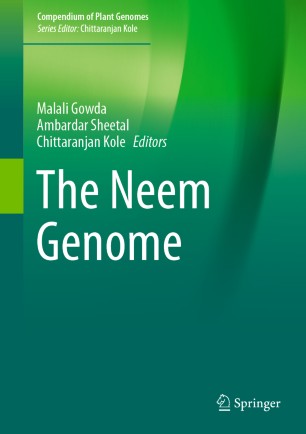 This book describes the sequencing efforts for Neem (Azadirachta indica A. Juss), one of the most versatile tropical evergreen tree species. The neem tree is a source of various natural products, including the potent biopesticide azadirachtin and limonoids, which have a broad spectrum of activity against insect pests and microbial pathogens. To identify genes and pathways in neem, three neem genomes and several transcriptomes are studied using next-generation sequencing technologies.
Neem has been extensively used in Ayurveda, Unani and homoeopathic medicine and is often referred to as the ‘village pharmacy’ by natives due to its wealth of medicinal properties.
Besides the description of the genome, this book discusses the neem microbiome and its role in the production of neem metabolites like salanin, nimbin and exopy-azadirachtin under in vitro conditions. It also highlights cell and tissue culture using various neem explants including the leaf, root, shoot, cambium, etc.