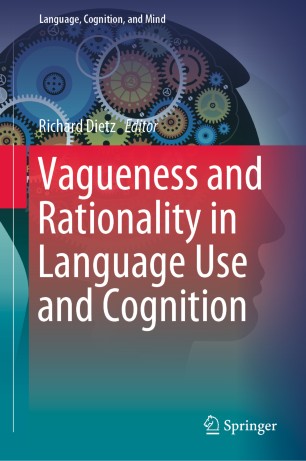 Vagueness and Rationality in Language Use and Cognition

This volume presents new conceptual and experimental studies which investigate the connection between vagueness and rationality from various systematic directions, such as philosophy, linguistics, cognitive psychology, computing science, and economics. Vagueness in language use and cognition has traditionally been interpreted in epistemic or semantic terms. The standard view of vagueness specifically suggests that considerations of agency or rationality, broadly conceived, can be left out of the equation. Most recently, new literature on vagueness has been released which suggests that the standard view is inadequate and that considerations of rationality should factor into more comprehensive models of vagueness. The methodological approaches presented here are diverse, ranging from philosophical interpretations of rational credence for vagueness to adaptations of choice theory (dynamic choice theory, revealed preference models, social choice theory), probabilistic models of pragmatic reasoning (Bayesian pragmatics), evolutionary game theory, and conceptual space models of categorisation.

I have no doubt that this volume will be a valuable contribution to the current literature on the topic. All chapters are refreshingly original, and they offer surprising connections between vagueness as a semantic phenomenon and other seemingly unrelated problems in game theory, Bayesian epistemology or social choice theory. As a result, the reader is able to acquire a broad understanding of the problem, as well as a sense of its pervasiveness.  The book also exhibits a delicate balance between conceptual and experimental approaches to vagueness. It is highly recommended to scholars and graduate students working on epistemology, philosophy of language, cognitive psychology, or linguistics. Eleonora Cresto, CONICET, Buenos Aires, Argentina