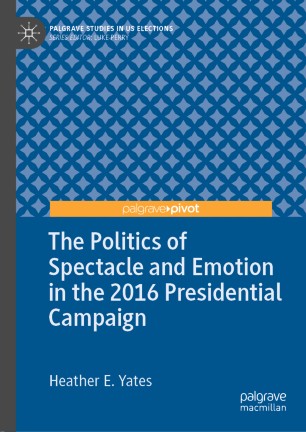 The Politics of Spectacle and Emotion in the 2016 Presidential Campaign

Part of the Palgrave Studies in US Elections book series (PSUSE)

This book examines the highly emotional context of the 2016 US presidential campaign through the scope of political theater and emotional attribution. It takes inventory of the political landscape that defined the campaign and advances the argument that the campaign’s high intensity generated a more interest-attentive citizenry and became an exercise in political theater. A framework operationalizing the components of political spectacle anchors the analysis treating emotions, affect transfer and the rise of negative partisanship. The analytical scope is focused specifically on voters’ emotional responses toward Donald Trump and Hillary Clinton and empirically demonstrates the effects of discrete feelings on five emotional dimensions including pride, hope, fear, anger, and disgust on attitudes about issues ranging from the economy to immigration to the 2016 Supreme Court vacancy. Anchored in the Affective Intelligence Theory and affect transfer, the findings lend support to the principles of negative partisanship that characterized the 2016 presidential contest.