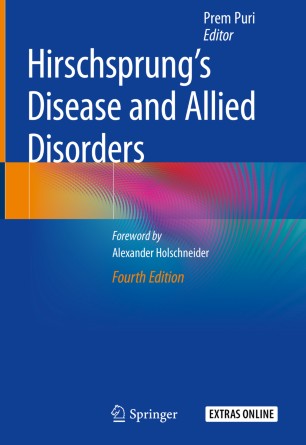 The fourth edition of this leading book provides an authoritative, comprehensive and complete account of the neuronal disorders of the lower gastrointestinal tract in children. The book has been thoroughly revised and updated to reflect major advances that have occurred both in the understanding as well as the treatment of Hirschsprung’s disease.

Contents discuss the latest therapies such as stem cell therapies, the epidemiology and association with multiple endocrine neoplasia and approaches to diagnosis such as radiology and manometry as well as Hirschsprung’s disease in adolescents and adults.

Surgical approaches are thoroughly covered and include a new chapter on intestinal transplantation options. The follow-up care and long-term outcomes of patients who have undergone therapy are also addressed in this edition.

With several new chapters added and the contents updated and re-worked, this edition is authored by the leading current experts in their respective fields. It is a must-have book for pediatric surgeons, pediatricians, gastroenterologists, and colorectal surgeons.

Professor Puri is known internationally for his research into underlying mechanisms causing birth defects, and innovative treatments, which have benefited children all over the world. He is a multi award-winning researcher whose previous awards include People of the Year Award (Highest Irish National Award), the prestigious Denis Browne Gold Medal by the British Association of Paediatric Surgeons and Rehbein Medal by the European Paediatric Surgeons Association for outstanding contribution to paediatric surgery. He has been a visiting professor to many leading universities all over the world, and invited speaker at over 250 international scientific meetings. He has published 10 books, 147 chapters in textbooks and over 700 articles in peer-reviewed journals.  He is the Editor of Newborn Surgery regarded as the authoritative book in the field, and the 4th edition is now published, and also of the widely acclaimed Pediatric Surgery (Atlas Series) which is in its 2nd edition. His research has been cited over 20,000 times in peer-reviewed articles.

“The book would be interesting to pediatric and surgical students and residents with a special interest in these conditions, it will be of most interest to pediatric gastroenterology and surgical fellows and those in practice in those specialties. There are current references to new genetics and pathological information that will be of interest to selected specialists in those areas as well. … This is an excellent book that will be useful to the intended audience.” (Vincent R. Adolph, Doody's Book Reviews, August 30, 2019)