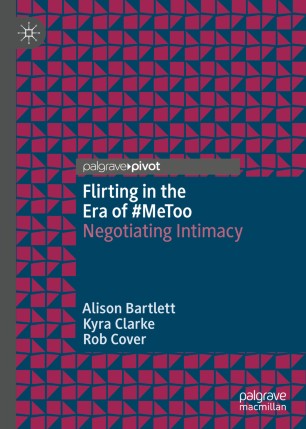 Flirting in the Era of #MeToo

“Flirting in the Era of #MeToo: Negotiating Intimacy is a gem of a book. It draws on a staggering range of disciplines: from etymology to psychoanalysis, from queer theory to film theory, and from cultural studies to sociology, and beyond. It’s the first academic publication to theorise #MeToo with such acuity, and I’m genuinely excited by how rich and important a critical intervention it makes.”
—Emma Rees, Professor of Literature and Gender Studies, University of Chester, UK
This book provides a contemporary review of the social practices and representations of flirting. In the wake of #MeToo, flirting has become entangled with stories of harassment and abuse that have generated both outrage and confusion. Nevertheless, this book argues that negotiating intimacy has always been an ambiguous social practice that can be risky and fraught, and examines how the presiding perception of flirting is constructed in contemporary cultural media. The book interrogates the relation between flirting and scandal, the kinds of scripts available in popular culture, and relations to feminism and other current social theories around gender and sexuality. It asks the questions; how can desire be declared? How can playfulness be understood? And what kind of language is available to speak about these complexities? Drawing from a range of media forms such as public scandal, reality television, and teen film, Flirting in the Era of #MeToo argues that contemporary flirting is both provocative and conservative in its negotiation of an assemblage of shifting values, and considers possibilities for social innovation and change in light of these competing tensions.