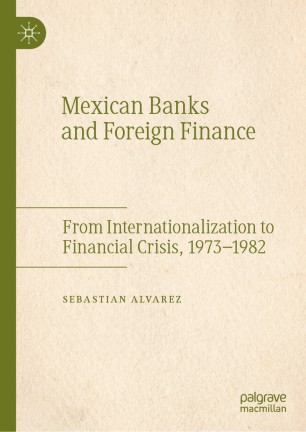 From Internationalization to Financial Crisis, 1973–1982

This book is one of the first historical revisions of the Latin American debt crisis of 1982, exploring recently disclosed archival sources for a number of creditor and debtor institutions. It fills a gap on the national and international historiography on international finance in the 1970s and the Latin American debt crisis of the 1980s. The domestic banking approach in revisiting the 1982 financial crisis is a main distinction of this work and the consequences of the involvement of Mexican banks in international finance a major contribution to the literature.

Beyond its thoroughly international approach, the book addresses a broad array of disciplines: financial history, political economy, international relations and business history. While the focus is on financial crisis, its implications extend to current regulatory and financial policy relative to crisis and non-crisis matters. In addition to providing a template for understanding other instances of financial crisis, the book points the way to research in a wide range of additional questions. These include the economic role of foreign capital, the transmission of financial crisis, and the decision criteria of states during crises. It also offers a strong example of the importance of politics in resolving economic problems. Because of this, the book will be of interest to historians, economists and political scientists.

Sebastian Alvarez is a Swiss National Science Foundation (SNSF) Postdoctoral Fellow at the History Faculty of the University of Oxford, UK, and Associate Research Fellow at St Hilda's College, UK. His research focuses on sovereign debt, international banking and financial crises during the decade leading to the Latin American debt crisis of the 1980s. He has been awarded the ‘Prix de la Relève 2016’ by the Swiss Academy of Humanities and Social Sciences (SAGW) and a number of fellowships by the SNSF, the European Commission and the French government. He holds a PhD in Economic and Social History from the University of Geneva, Switzerland, a MA in Public Economics from the University of Paris 1 - Pantheon Sorbonne, France, and a BA in Economics from the National University of Cordoba, Argentina.