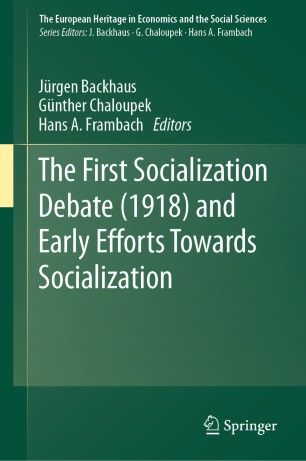 Part of the The European Heritage in Economics and the Social Sciences book series (EHES, volume 23)

This book discusses the 1918 European socialization debate, its consequences, and its relevance a century later. Following the end of the First World War, the disastrous social and economic situation facing Europe led to calls for socialization of central economic sectors, as well as measures for the improvement of work conditions and social security. This book rekindles the debate, presenting the basic issues of socialization from different European countries and taking into account current developments. The chapters track the socialism debate in Europe from its initial inception in 1918 and examine the ways in which it has shaped the public discourse in the years following, drawing theoretical connections between the conditions that created the environment for the debate to begin and contemporary social and political trends. This book will be of particular interest to graduate students and researchers of socioeconomics, ethics, the history of economic thought, history, and political science.