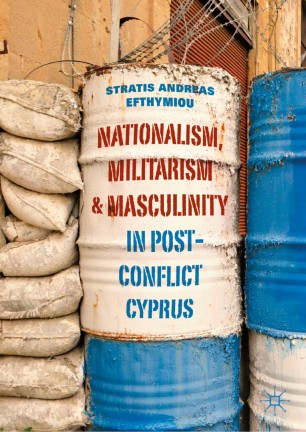 This book uses empirical research to introduce the relationship between nationalism, militarism and masculinity. The co-constitution between these three factors is susceptible to change and hinders reconciliation, according to the author. Drawing on the case of Cyprus, a country in conflict with Turkey, Efthymiou reveals how nationalism, militarism and masculinity were constructed after the war, and re-adapted following the opening of internal borders and European Union accession.

Nationalism, Militarism and Masculinity in Post-Conflict Cyprus draws on rich field-research, with soldiers and officers in army barracks, politicians such as former President of Republic of Cyprus Glafkos Clerides, leaders of radical far-right movements and the Greek Cypriot public. The book offers invaluable insight into the application of nationalism, militarism and masculinity in governmental policy including by the Cyprus Defence Ministry, and will be of interest to students and scholars in sociology, gender studies, peace studies, security studies, politics and international relations, as well as governments and NGOs.

Stratis Andreas Efthymiou works both in academia and policy consultancy. He has applied the research of this book in policy at the Cyprus Defense Ministry, Cyprus Peace Negotiations and country assessments of the Transparency International Defence and Security Programme.