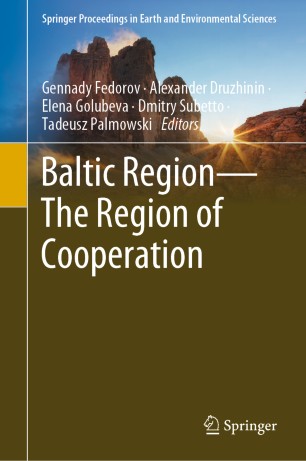 The Baltic macroregion is a platform for the development of different areas of international cooperation, which are an important factor affecting the socioeconomic growth of the region’s states. The deteriorating political relations between Russia and its Baltic neighbours complicate the development of mutual connections. However, economic and sociocultural cooperation and joint environmental projects continue despite all the difficulties. Based on recent studies carried out by Russian and Polish researchers, this book examines current trends in the socioeconomic development of the region’s countries and various forms of transboundary cooperation and provides recommendations for further development. Special attention is paid to sustainable environmental management and environmental protection, transboundary ties among companies and among people, the development of international tourism, opportunities for reinforcing the contact function of the border, and spatial planning. The book addresses theoretical problems that are of crucial significance to economic development and transboundary cooperation, namely, those of path dependence, the emerge.

Prof. Gennady M. Fedorov, director of the IKBFU’s Institute of Environmental Management, Urban Development and Spatial Planning, is one of the leading Russian specialists in economic, social, and political geography. Prof. Fedorov has published over 440 works focusing primarily on transboundary cooperation, regional studies, spatial planning, and geopolitics. He authored the research concept of geodemographic situation. Prof. Fedorov is a member of the Presidium of the Academic Council of the Russian Geographical Society and the deputy editor-in-chief of the journal The Baltic Region.

Prof. Alexander G. Druzhinin is the director of the North Caucasian Research Institute for Economic and Social Studies at the Southern Federal University. He is a leading specialist in the theory and methodology of socio-economic geography, the geography of Russian culture, the geographical, economic, and socio-environmental problems of Russia’s South, and geographical urban studies. Prof. Druzhinin has published over 370 research works. He is the chair of the Association of Russian Social Geographers.

Рrof. dr. hab. Tadeusz Palmowski heads the Department of Regional Development at the University of Gdańsk. His scientific interests are in Baltic Europe, maritime cross-border cooperation, spatial planning in coastal regions, maritime affairs, seaports, the Kaliningrad region, and Polish-Russian cross-border cooperation. He has published over 250 works. Prof. Palmowski is a member of the editorial boards of the journals Bulletin of Geography, Tiltai, Bridges, Brücken, and The Baltic Region.

Dmitri A. Subetto heads the Department of Physical Geography and Environmental Management at the Aleksandr Herzen Russian State Pedagogical University (Saint Petersburg). His research interests are in the study of lakes and lacustrine sediments from the perspective of palaeogeography, palaeolimnology, palaeoclimatology, and geoecology. A member of the Presidium of the Academic Council of the Russian Geographical Society, Prof. Subetto has published over 500 research works.

Prof. Vyacheslav A. Shuper is a leading research fellow at the Institute of Geography of the Russian Academy of Sciences and a professor at the Department of Economic and Social Geography of Russia at Moscow State University. He is a top specialist in theoretical geography and central place theory. Prof. Shuper developed a relativistic central place theory. He has published over 200 research works in Russian, English and French. Prof. Shuper’s contributions have appeared in the popular science media. He is a member of the Presidium of the Academic Council of the Russian Geographical Society