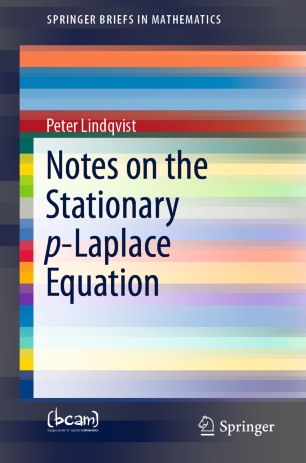 Notes on the Stationary p-Laplace Equation

This book in the BCAM SpringerBriefs series is a treatise on the p-Laplace equation. It is based on lectures by the author that were originally delivered at the Summer School in Jyväskylä, Finland, in August 2005 and have since been updated and extended to cover various new topics, including viscosity solutions and asymptotic mean values. The p-Laplace equation is a far-reaching generalization of the ordinary Laplace equation, but it is non-linear and degenerate (p>2) or singular (p<2). Thus it requires advanced methods. Many fascinating properties of the Laplace equation are, in some modified version, extended to the p-Laplace equation. Nowadays the theory is almost complete, although some challenging problems remain open.