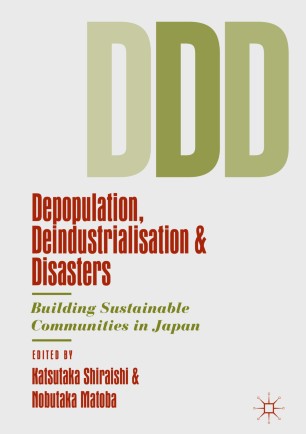 Depopulation, Deindustrialisation and Disasters are three of the biggest problems facing Japan today. This book discusses how sustainable communities are being created in Japan in an attempt to overcome the threat of the triple Ds . It provides an overview of how each of these three core issues endangers the sustainability of local communities especially, but also discusses how they might also provide an opportunity to replace outdated paradigms, rooted in expansion and competition, with a new way forward on a global scale.
The authors explore how the Japanese government has followed the worldwide trend of implementing neo-liberal policies in response to globalisation and how these policies have resulted in a mass exodus into larger cities such as Tokyo, leaving local communities more vulnerable to socio-economic threats. The authors highlight non-metropolitan areas facing the ‘triple D’ threat and introduce several case studies on how these are working towards achieving a more sustainable future.
Written by members of the LORC (Research Centre for the Local Public Human Resources and Policy Development, Ryukoku University) this collection will be invaluable to scholars across the social and political sciences and to those interested in how innovative policy making can positively influence sustainable development.
Katsutaka Shiraishi is Professor at the Faculty of Policy Science, Ryukoku University, Japan and has acted as the LORC’s Director between 2008 and 2011 and again since 2014.  He is also the chair of the board of the Kyoto Alliance, a collaborative platform between universities, local governments, business organisations and non-profit organisations (NPOs) in Kyoto.
Nobutaka Matoba is Professor at the Faculty of Policy Science, Ryukoku University, Japan and has acted as the LORC’s Deputy Director since 2014.  He obtained a PhD from the University of Birmingham in the United Kingdom.