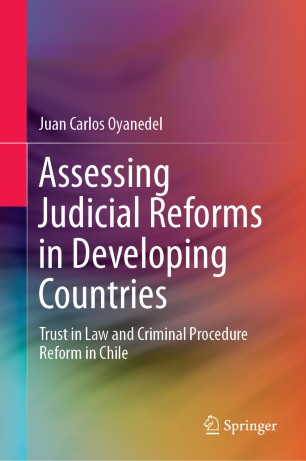 Trust in Law and Criminal Procedure Reform in Chile

This book examines how judicial reform can be effectively assessed through a procedural justice approach. It provides a practical framework for assessment of judicial reform, examining a successful reform in Chile through large scale surveys and longitudinal research.

Judicial reform is a key element to democratization and modernization processes in the developing world. Practitioners have struggled with ways to analyze the effects of judicial reform, and to define success. Procedural justice theorists propose that people will obey the law if they consider it fair; this affects willingness to collaborate with the police and the courts, and the general approach that the public has towards social regulations. Judicial reforms such as criminal procedure reforms, which explicitly guarantee the development of a fairer judicial process, represent a scenario that puts these theoretical assumptions to the test.  With policy recommendations and applications for international judicial reform, this book tests the real conditions of a procedural justice approach with empirical assessment and analysis.

With implications for Latin America and countries undergoing judicial or political reforms worldwide, this book will be an important resource for researchers, policy makers and all those interested in the analysis of judicial reforms, democratization processes and the psychology of justice.

Juan Carlos Oyanedel is Director of the Quantitative Research Centre at Universidad Andrés Bello in Santiago de Chile. He has extensive experience of public policy evaluation and survey work, and has held several government posts in the field of social statistics at the Chilean Institute for National Statistics and the Chilean Home Office, including the Technical Head of the Census and being in charge of the redesign of the National School Violence Survey and the Chilean Crime Survey. He participated in the Chilean criminal procedure reform as a senior consultant for the Judicial Reform Project implemented by the German Society for Technical Cooperation (GTZ) in Chile, carrying out baseline studies for the evaluation of the criminal procedure reform. He has been a Research Associate at the Institute for Criminal Policy Research, King’s College London and a Visiting fellow at the Max Planck Institute for Foreign and International Criminal Law and Birkbeck College, University of London. He holds a PhD in Law from King’s College London, a Master’s in Education from the Autonomous University of Barcelona and a Licentiate in Sociology from the University of Chile.