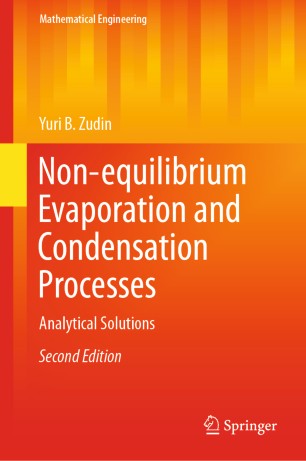 This monograph is focused mostly on the exposition of analytical methods for the solution of problems of strong phase change. A new theoretical model is proved useful in describing, with acceptable accuracy, problems of strong evaporation and condensation. The book is the first to treat the problem of asymmetry for evaporation/condensation. A semi-empirical model for the process is proposed for purposes of practical calculation of the process of strong evaporation. The “limiting schemes” of the vapor bubble growth are analyzed. The thermo-hydrodynamic problem of evaporating meniscus of a thin liquid film on a heated surface is considered. A theoretical analysis of the problem of evaporation of a drop levitating over a vapor cushion is performed. The problem of vapor condensation upon a transversal flow around a horizontal cylinder is considered.

The second edition is extended by (i) the conjugate “strong evaporation - heat conduction” problem, (ii) the influence of accommodation coefficients on intensive processes of evaporation and condensation, (iii) the problem of supersonic condensation. This book is the first to present a comprehensive theoretical approach of boiling problems: nucleate boiling, superfluid helium phase transition, similarity between pseudo-boiling and subcritical pressure nucleate boiling. The target audience primarily comprises research experts in the field of thermodynamics and fluid dynamics, but the book may also be beneficial for graduate students.