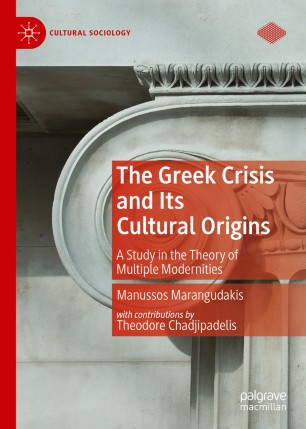 The Greek Crisis and Its Cultural Origins

A Study in the Theory of Multiple Modernities

“This is the first serious book-length, comprehensive treatment of the role of society and the cultural imperatives that undergird the Greek sovereign debt drama and the country’s inability to climb out of it. Deftly mixing relevant sociological literature with key concepts from anthropology, psychology, religion, and political science, this volume is a sophisticated, strongly substantiated, theoretically and empirically grounded work that will fill a void in the literature on Greece and beyond.”

This original analysis of modern Greece’s political culture attempts to present a “total social fact”—a coherent and complex representation of Greek socio-political culture—to identify the cultural causes of Greece’s recent disastrous economic crisis. Using a culturalist frame inspired by the Yale Strong Program, Marangudakis argues that the core cultural orientations of Greece have determined its politics—Greek secular culture flows out of the religion of Eastern Orthodoxy with its mysticism, icons, and general “ortherworldly-nesses.” This theoretical discussion, bringing together Eisenstadt, Michael Mann, Banfield, and Taylor, is complemented by an innovative use of survey data, processed by political scientist and statistician . The carefully deployed quantitative data demonstrate that the culture previously described is actually shared by people living in Greece today. In his sweeping conclusion to this thorough cultural analysis, Marangudakis reflects on the prospects of Greek cultural recovery through the construction of a non-populist civil religion.