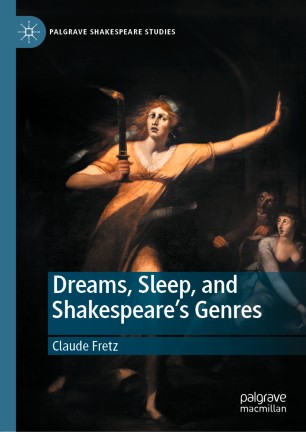 ‘A deft, rigorous and thrilling analysis of dreams and sleep in Shakespeare’s drama, informed by a unique interdisciplinary focus. This book is a veritable cabinet of wonders which opens up early modern cultures of dreaming in new and exciting ways. This marvellous study both refreshes and redefines its field.’

Chris Laoutaris, Lecturer at the University of Birmingham’s Shakespeare Institute, Stratford-upon-Avon, UK, and author of Shakespeare and the Countess: The Battle that Gave Birth to the Globe

‘This thoughtful and well-written book makes especially good use of the dream interpretation books of the sixteenth and early seventeenth centuries and connects Shakespeare’s work to much other Renaissance drama. Much of the value of the book is the way the author examines and analyzes the classical influences on Shakespeare’s work. Fretz’s knowledge of classical literature is remarkable.’

Carole Levin, Willa Cather Professor of History and Director of the Medieval and Renaissance Studies Program at the University of Nebraska-Lincoln, USA

The book discusses the significance of dreams and sleep in early modern culture, and explores the dramatic opportunities that this offered to Shakespeare and his contemporaries. It also offers new insights into how Shakespeare adapted earlier literary models of dreams and sleep – including those found in classical drama, in medieval dream visions, and in native English dramatic traditions. The book appeals to academics, students, teachers, and practitioners in the fields of literature, drama, and cultural history, as well as to general readers interested in Shakespeare’s works and their cultural context.

Claude Fretz is Research Fellow at Queen’s University Belfast, UK, and Associate Fellow of the research centre ‘European Dream-Cultures’ at Saarland University, Germany. He obtained his PhD from the Shakespeare Institute, University of Birmingham. He has published on Shakespeare, representations of dreams and sleep in early modern literature, and Restoration drama.