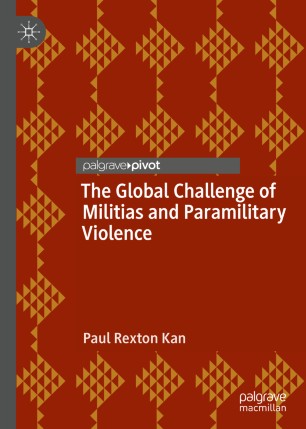 The Global Challenge of Militias and Paramilitary Violence

“Paul R. Kan offers an authoritative assessment of the increasingly important role that militias play in global security. Kan’s book fills a critical gap in the literature, and is highly recommended for scholars and policymakers attempting to understand the diversity of violent non-state actors.”

“This work sets a new standard with regard to analysis of the impact of militias and paramilitaries—both understudied groups in contemporary conflict—on global stability and state fragility.”

This book describes militias as significant and prevalent actors in today’s international security environment. To separate them from other types of violent non-state groups, such as terrorists, guerrillas and insurgents, the author describes militias as local guardians that use violence to fill a variety of political, social and security gaps, which have created vulnerabilities for their particular constituencies.  Although militias are local in orientation, their effects are not contained to particular countries and have only added to the instability in the international system. This book explores how militias contribute to international security issues by furthering state fragility, undermining human rights and democratization, enabling illicit trafficking, prolonging internal conflicts and fostering proxy wars.

Paul Rexton Kan is Professor of National Security Studies at the U.S. Army War College, USA. His work has been cited in the New York Times, Washington Post, Forbes and featured on the websites DefenseOne and Freakanomics.