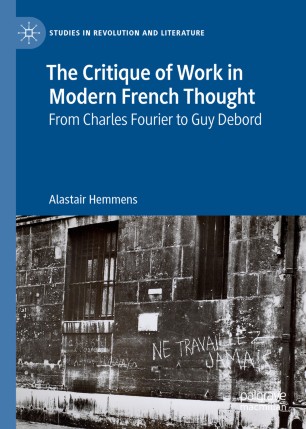 The Critique of Work in Modern French Thought

From Charles Fourier to Guy Debord

Part of the Studies in Revolution and Literature book series (SRL)

What is work? Why do we do it? Since time immemorial the answer to these questions, from both the left and the right, has been that work is both a natural necessity and, barring exploitation, a social good. One might criticise its management, its compensation and who benefits from it the most, but never work itself, never work as such. In this book, Alastair Hemmens seeks to challenge these received ideas. Drawing on the new ‘critique-of-value’ school of Marxian critical theory, Hemmens demonstrates that capitalism and its final crisis cannot be properly understood except in terms of the historically specific and socially destructive character of labour. It is from this radical perspective that Hemmens turns to an innovative critical analysis of the rich history of radical French thinkers who, over the past two centuries, have challenged the labour form head on: from the utopian-socialist Charles Fourier, who called for the abolition of the separation between work and play, and Marx’s wayward son-in-law, Paul Lafargue, who demanded The Right to Laziness (1880), to the father of Surrealism, André Breton, who inaugurated a ‘war on work’, and, of course, the French Situationist, Guy Debord, author of the famous graffito, ‘never work’. Ultimately, Hemmens considers normative changes in attitudes to work since the 1960s and the future of anti-capitalist social movements today. This book will be a crucial point of reference for contemporary debates about labour and the anti-work tradition in France.

“This book serves as a useful introduction to a tradition that remains relatively obscure to English readers.” (Ross Sparkes, Marx and Philosophy, marxandphilosophy.org.uk, January 6, 2021)
Buy options