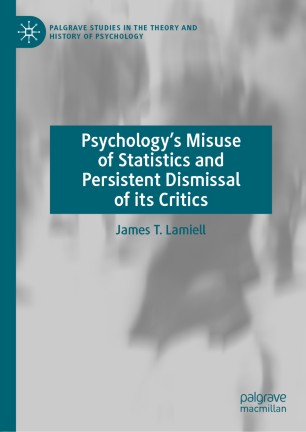 Psychology’s Misuse of Statistics and Persistent Dismissal of its Critics

This book is a strenuous critique of the misinterpretation of statistical knowledge of populations in mainstream psychology, exploring the implications of assuming that those statistics constitute scientific knowledge of individuals. It investigates the essential nature and historical roots of this interpretive practice, and documents the lack of change in mainstream thinking despite previous critiques of the practice. The author contends that prevailing interpretive traditions result in bad science, in that invalid claims are made to knowledge of individuals. He also discusses the socio-ethical problems resulting from this misinterpretation of statistics, where psychological practitioners unjustifiably endorse interventions in the lives of individuals. Lamiell urges psychologists to abandon the aggregate statistical methods which he argues have transformed the field into ‘psycho-demography,’ and to embrace instead alternative research methods that are logically suited to gaining scientific knowledge about the psychological functioning of individuals. This book concludes by highlighting some of the currently available methodological alternatives, as well as discussing some enduring conceptual impediments to the serious consideration of those alternatives.
James T. Lamiell is Professor Emeritus of Psychology at Georgetown University, USA after having spent thirty-six years on the faculty at that institution. He holds the 2001 Bunn Award for Faculty Excellence at Georgetown, and is a three-time Fulbright scholar to Germany. He has authored four books and translated a fifth.