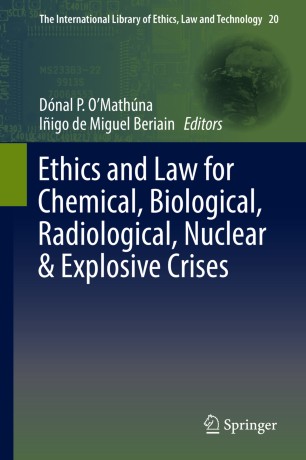 Part of the The International Library of Ethics, Law and Technology book series (ELTE, volume 20)

This book provides a current analysis of the legal and ethical challenges in preparing for and responding to chemical, biological, radiological, nuclear and explosive (CBRNE) crises. From past events like the Chernobyl nuclear incident in Russia or the Bhopal chemical calamity in India, to the more recent tsunami and nuclear accident in Japan or the Ebola crisis in Africa, and with the on-going threat of bioterrorism, the need to be ready to respond to CBRNE crises is uncontroversial. What is controversial is whether we are on a path that adequately prepares us for the next event. The ethical and legal scholars in this volume hold that much work remains to be done and offer this book to stimulate further reflection and dialogue around CBRNE crises. This is an indispensable book for both students and scholars of bioethics, international law, public health, as well as for regulators and administrators developing policy and legislation related to public health planning and emergency responses.

Dónal O’Mathúna has degrees in pharmacy and bioethics. He is Associate Professor in the School of Nursing and Human Sciences at Dublin City University in Ireland and the College of Nursing at The Ohio State University in the USA. He is widely published in bioethics and has led an EU-funded network examining the developing field of disaster bioethics. As Chair of this COST Action on disaster bioethics, he has helped to bring together a network of scholars, humanitarian organisations, and international organisations to identify, examine and address ethical issues in disasters. This has led to publications and funded research projects on the ethical challenges arising with disasters of both natural and human origins. This work has led to his involvement in expert committees developing ethics guidelines for disasters, including those of the World Health Organization (WHO), the United Nations Children’s Fund (UNICEF), the International Committee of the Red Cross (ICRC), and others. He has a particular interest in how nonideal moral theory can be applied in disasters, on the importance of addressing vulnerability in disasters, and the place of research ethics in disasters. He has a long-standing interest in research ethics more generally, having chaired his university’s research ethics committee for a number of years.

Iñigo de Miguel Beriain has degrees in economics, law and philosophy. He is Investigador Distinguido at the University of the Basque Country in Bilbao and IKERBASQUE Research Professor at the Basque Foundation for Science, Bilbao, Spain. He has published four monographs and a huge number of articles and book chapters in bioethics and biolaw. He has participated in several EU funded projects, such as EDEN: End-user driven Demo for Chemical, Biological, Radiological and Explosive (CBRNE); Chimeras and Hybrids in Comparative European and International Research. Scientific, ethical, philosophical and legal aspects; BIOTETHED. Biotechnology Ethics: deepening by research, broadening to future applications and new EU members, permeating education to young scientist; LATINBANKS. Study on the legal and social implications on the creation of banks with human biological material in Latin America; E-ENERCA: New e-Health Services for the European Reference Network on Rare Anaemias; ICGC: International Cancer Genome Consortium; EU-GEI Project: European Network of National Schizophrenia Networks Studying Gene-Environment Interactions. He has also been part of two COST Actions. ISCH COST Action IS1001, Bio-objects and their boundaries: governing matters at the intersection of society, politics, and science and COST Action IS1201, Disaster bioethics. He has been bestowed with the following awards: EXECNA Award for Foreign Commerce, the Víctor Grifolsi Lucas Foundation 2006-2007 Award for Research in Bioethics and the 2008 Award Junta General del Principado de Asturias-SociedadInternacional de Bioética (SIBI).