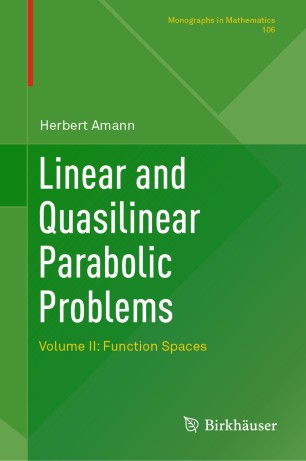 Part of the Monographs in Mathematics book series (MMA, volume 106)

This volume discusses an in-depth theory of function spaces in an Euclidean setting, including several new features, not previously covered in the literature. In particular, it develops a unified theory of anisotropic Besov and Bessel potential spaces on Euclidean corners, with infinite-dimensional Banach spaces as targets.

It especially highlights the most important subclasses of Besov spaces, namely Slobodeckii and Hölder spaces. In this case, no restrictions are imposed on the target spaces, except for reflexivity assumptions in duality results. In this general setting, the author proves sharp embedding, interpolation, and trace theorems, point-wise multiplier results, as well as Gagliardo-Nirenberg estimates and generalizations of Aubin-Lions compactness theorems.

The results presented pave the way for new applications in situations where infinite-dimensional target spaces are relevant – in the realm of stochastic differential equations, for example.