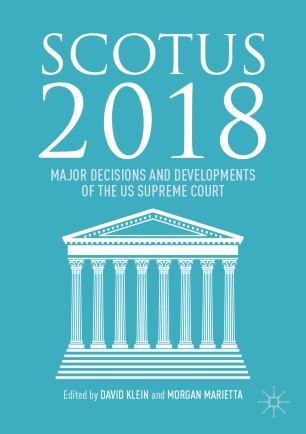 Major Decisions and Developments of the US Supreme Court

Each year, the Supreme Court of the United States announces new rulings with deep consequences for our lives. This inaugural volume in Palgrave’s new SCOTUS series describes, explains, and contextualizes the landmark cases of the US Supreme Court in the term ending in 2018, covering issues such as gay rights, religious liberty, public sector unions, coerced speech, digital privacy, voting rights, and the Trump travel ban. Bringing together notable scholars of the Court in one volume, the chapters in Scotus 2018present the details of each ruling in its specific case, its meaning for constitutional debate, and its impact on public policy or partisan politics. Finally, SCOTUS 2018 offers a big-picture look at Justice Neil Gorsuch’s first full term in office, the legal and political legacy of former Justice Anthony Kennedy, and the controversial nomination and confirmation of Justice Brett Kavanaugh.