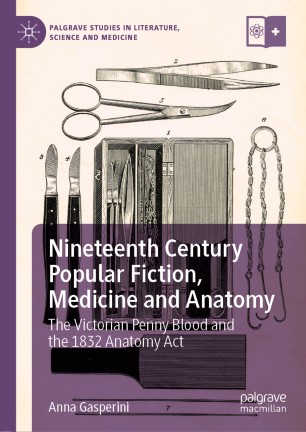 The Victorian Penny Blood and the 1832 Anatomy Act

‘The 1832 Anatomy Act was a crime against the poor.  Anna Gasperini uses to it explain why corpses, monsters, demon barbers and body snatchers populated cheap fiction in the early Victorian years.  This is a major inter-disciplinary study that establishes the gothic penny dreadful as a vital source for understanding popular culture in the age of Dickens and the Chartists.’ — Rohan McWilliam, Professor of Modern British History, Anglia Ruskin University, UK
'Anna Gasperini’s Nineteenth-Century Popular Fiction, Medicine, and Anatomy is a welcome addition to scholarship on early Victorian narrative, the history of medicine, and popular culture. This deftly written, meticulously researched monograph reads like a novel and identifies a subject that we have strangely overlooked: the surge of popularity in the penny blood at a time when medical experimentation was unstandardized or — worse — adjudicated by class.' — Tabitha Sparks, Associate Professor of English,  McGill University, Canada

‘Dr Gasperini brilliantly resurrects from unjust neglect the penny bloods and penny dreadfuls so beloved of poor and working-class late-Georgians and Victorians. She skilfully traces the impact of the bodysnatching / burking furore and subsequent Anatomy Act on the genre. She expertly reveals the eerie and uncanny spaces of 19th-century London as providing a dominant inspiration for these proto-horror tales, and explores how the inexorable rise of the medical profession contributed a deep sense of unease for a metropolitan population who feared that their material being was vulnerable to being co-opted for the progression of science. This is a long-overdue and highly intelligent examination of the literature of the socially powerless and underprivileged - and a terrific read, to boot.’ — Sarah Wise, Lecturer and author, City University London, UK

This book investigates the relationship between the fascinating and misunderstood penny blood, early Victorian popular fiction for the working class, and Victorian anatomy. In 1832, the controversial Anatomy Act sanctioned the use of the body of the pauper for teaching dissection to medical students, deeply affecting the Victorian poor. The ensuing decade, such famous penny bloods as Manuscripts from the Diary of a Physician, Varney the Vampyre, Sweeney Todd, and The Mysteries of London addressed issues of medical ethics, social power, and bodily agency. Challenging traditional views of penny bloods as a lowlier, un-readable genre, this book rereads these four narratives in the light of the 1832 Anatomy Act, putting them in dialogue with different popular artistic forms and literary genres, as well as with the spaces of death and dissection in Victorian London, exploring their role as channels for circulating discourses about anatomy and ethics among the Victorian poor.