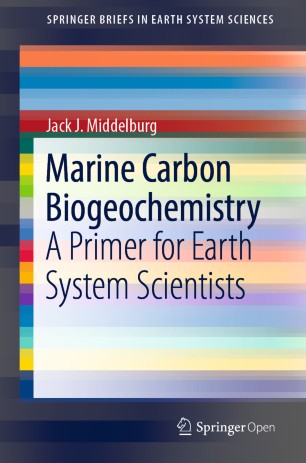 A Primer for Earth System Scientists

This open access book discusses biogeochemical processes relevant to carbon and aims to provide readers, graduate students and researchers, with insight into the functioning of marine ecosystems. A carbon centric approach has been adopted, but other elements are included where relevant or needed. The book focuses on concepts and quantitative understanding of primary production, organic matter mineralization and sediment biogeochemistry. The impact of biogeochemical processes on inorganic carbon dynamics and organic matter transformation are also discussed.

Jack Middelburg was trained as a biogeologist/geochemist and worked from 1992-2009 at the Netherlands Institute of Ecology. Since 2009 he holds the geochemistry chair at Utrecht University. He has a very wide scientific interest, from inorganic geochemistry via biogeochemistry to ecology, from elemental-cycles oriented to organisms-oriented studies, from weathering of rocks to deep-sea pore-waters, from laboratory studies and field observations to numerical modelling, from global scale down to nanometer scale, and through the use of reductionistic as well as holistic and explorative approaches. He has published more than 330 articles and serves as associate editor for various journals, including Science Advances, Biogeosciences and Geochimica et Cosmochimica Acta. He has been elected member of the Royal Netherlands Academy of Arts and Sciences in 2008 and is recipient of various awards, including ASLO's Hutchinsons medal in 2016 and the EGU's Vernadsky medal in 2017.