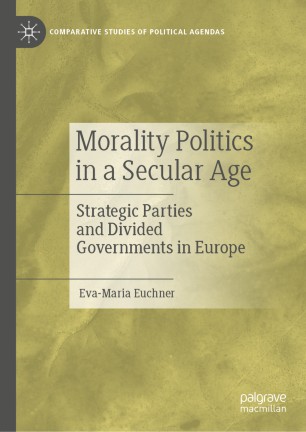 Morality Politics in a Secular Age

"Euchner’s carefully researched and cogently argued study of morality politics in Europe adds an outstanding piece of research to the ever growing literature on religion and politics. Its combination of quantitative and qualitative comparative analysis involving a novel data set and cross-policy perspectives demonstrates persuasively the role of religion as a resource for political action even in secularized societies."
—Michael Minkenberg, Viadrina European University, Germany
“Building upon the dichotomy between the “secular” and “religious” worlds of European morality politics, Dr. Euchner plumbs the empirical depths of four nations to unearth a compelling theoretical explanation for when value-laden conflicts surface in parliaments with a strong secular-religious party cleavage. This singularly important volume belongs in the institutional libraries and bibliographic collections of every serious student of public policy analysis, especially those of us who focus on morality policy.”
—Raymond Tatalovich, Loyola University Chicago, USA
This book introduces a new theoretical framework from which to understand religion and morality politics in Europe. This framework provides a first—and rather provocative—answer to the general debate on how religion influences policy-making processes. Specifically, the book argues that religion is more a strategic resource for political parties than a fundamental normative doctrine shaping political parties’ policy-making behavior in a systematic and coherent way. The framework proposes a mechanism (i.e. wedge issue competition) that can be used to identify and explain the conditions under which issues related to religious values rise and fall in parliaments of the religious world in Europe and what consequences we may expect in terms of policy reforms.
Eva-Maria Euchner is a postdoctoral researcher at the Ludwig-Maximilians-University Munich, Germany. She studied Politics and Public Administration at the University of Konstanz. Her research trajectory focuses on morality politics, religion and legislative behaviour. She has published articles in the Journal of European Public Policy, Politics and Religion and Parliamentary Affairs.