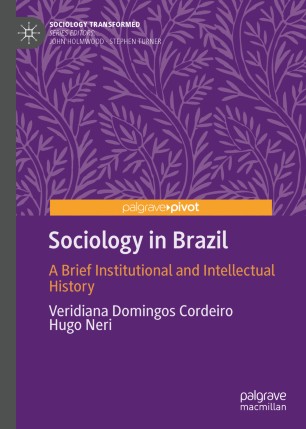 A Brief Institutional and Intellectual History

‘In a country marked by colonization, slavery, late industrialization and immense social inequality, sociology found fertile ground to understand how societies develop in peripheral conditions. Cordeiro and Neri show how this rich sociological tradition began its institutional trajectory in the early twentieth century and its subsequent contribution to the global sociology.’
—Carlos Sell, Federal University of Santa Catarina, Brazil
‘The book presents a new and long-overdue account of Brazilian sociology. It is an insightful book of sociology in a developing country and a milestone for further studies.’
—Gehard Preyer, Goethe-Universität Frankfurt am Main, Germany
This book provides an overview of the institutional and intellectual development of sociology in Brazil from the early 1900s to the present day; through military coups, dictatorships and democracies. It charts the profound impact of sociology on Brazilian public life and how, in turn, upheavals in the history of the country and its universities affected the its scientific agenda. This engaging account highlights the extent of the discipline’s colonial inheritance, its early institutionalization in São Paulo, and its congruent rise and fall during repeated regime changes. The authors’ analysis draws on original research that maps the concentration of research interests, new developments, publications and centers of production in Brazilian sociology, using qualitative and quantitative data. It concludes with a reflection on the potential impact of the recent far-right turn in Brazilian politics on the future of the discipline. This book contributes a valuable country study to the history of sociology and will appeal to a range of social scientists in addition to scholars of disciplinary historiography, intellectual and Brazilian history.
Veridiana Domingos Cordeiro is a researcher at the University of São Paulo, Brazil. Her current research focuses on social theory, memory, identity and narratives.
Hugo Neri is a researcher at the University of São Paulo, Brazil, and a visiting lecturer at the University of Innsbruck, Austria. His current research focuses on social theory, sociology of intellectuals, common sense, and risk.